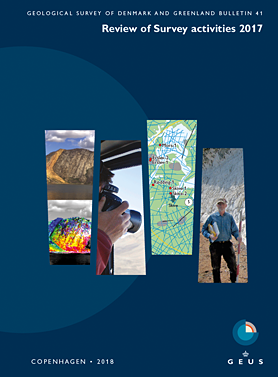 The 22 contributions in this issue of Review of Survey activities demonstrate the broad field of activities performed by the Geological Survey of Denmark and Greenland and external partners.

Seven papers on Danish geology comprise an investigation of reservoir sandstones for oil and gas production in the Danish Central Graben, an evaluation of alternative depository sites for unwanted brine in a commercial gas storage facility, and a study of alum shale nanoporosity, which provides new insight into the Danish shale gas play. Till deposits are addressed in a paper on chalk-glacitectonite and in an example of using ground-penetrating radar for a structural study. Two offshore articles describe Neogene oil-bearing diatom ooze in the North Sea and a large area of unusual, inclined bedding in Skagerrak.

In Greenland, four papers deal with remote sensing in geological mapping, describing advanced methodology and results of photogrammetry and hyperspectral mapping from mobile platforms such as helicopters and boats, and a fifth paper discusses the need for systematic updates of Survey maps as new data are acquired. A new geophysical map offshore West Greenland is also presented and geochemical data from sedimentary rocks in North Greenland are used to discuss potential mineralisation processes related to the world-scale zinc deposit at Citronen Fjord. The ongoing monitoring of the Greenland ice sheet is addressed in four contributions, including the newly established radioactive waste study at Camp Century and a reconstruction of past sea-ice extent off eastern Greenland back to the 19th century. Besides, records of European whaling and trading in the 17th–19th centuries are used to discuss past climate variations in West Greenland.

The issue also contains an evaluation of future use of and demand for rare-earth elements in wind turbines, a study of laser ablation techniques in the analysis of fish otoliths for fish stock monitoring, and an account of current activities to maintain and expand a common geological database for the European Union.