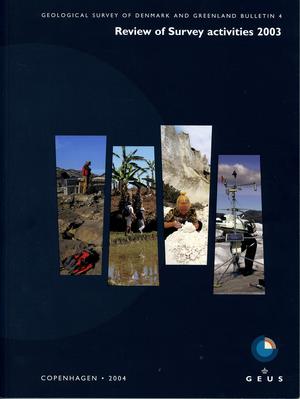 The Review of Survey activities presents a selection of 23 papers reflecting the wide spectrum of activities of the Geological Survey of Denmark and Greenland, from the microbial to the plate tectonic level.

The Survey's activities in Denmark are documented by ten papers. These include discussion of the complex history of hydrocarbon filling of Danish chalk fields, the possibilities for CO2 storage in Denmark and other European countries, and the geothermal potential of Denmark. Also covered is the search for new aquifers, several aspects of groundwater vulnerability to pesticide leaching, the various cutting-edge technologies used for groundwater analysis, the environmental history of Danish lakes and the distribution and transport of sediments along the North Sea coast of Denmark. One paper deals with the management of environmental data using the Internet.

The Survey's activities in Greenland and around the Faroe Islands are reported in ten articles. In Greenland, activities in 2003 were focused on West Greenland. Papers include a documentation of evidence for possible Jurassic source rocks off West Greenland, and reports on a mapping campaign in the Archaean province of central West Greenland that included exploration for gold and diamonds. The influence of climate change on the Greenland Inland Ice and its outlet glaciers is presented in two papers. On and around the Faroe Islands, seismic properties of basalts have been studied in detail and a geohazard study has been completed in Faroese offshore areas. The investigations relating to possible extended continental shelf claims off Greenland and the Faroe Islands that were initiated in 2003 are also outlined.

The Survey's international activities, funded by the European Union and various national and international funds for aid to developing countries, are the subject of three papers. The PROTECT project aiming at prediction of chalk cliff collapse is reported on, as well as two developing aid projects in cooperation with the Geological Survey Department of Ghana and the Vietnam Petroleum Institute.