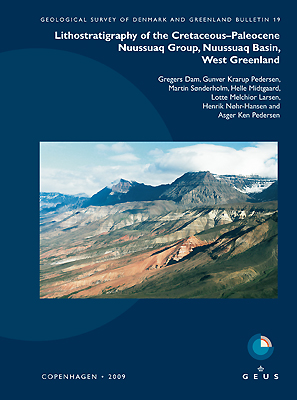 The Nuussuaq Basin contains several kilometres of siliciclastic sediments overlain by a thick pile of volcanic rocks. The sediments, which are exposed on Disko, Nuussuaq, Upernivik Ø, Qeqertarsuaq and Svartenhuk Halvø in central West Greenland, have been studied since the early 19th Century. The focus has changed through time from early studies on the occurrence of coal, fossil plants and invertebrate fossils to modern sedimentological and stratigraphical studies to decipher basin evolution and to encourage exploration for hydrocarbons.

The Nuussuaq Basin is the only onshore analogue for the subsurface sedimentary basins offshore West Greenland that are known primarily from seismic data. It is consequently important that the Nuussuaq Basin outcrops are at a scale comparable to seismic sections and furthermore that the lithostratigraphic subdivision presented here emphasises unconformity-bounded formations that potentially may be traced regionally, also on offshore seismic data.

This bulletin presents the lithostratigraphy of the Cretaceous–Paleocene sedimentary succession of the Nuussuaq Basin. The Nuussuaq Group (new) overlies Precambrian basement rocks and is overlain by volcanic rocks of the West Greenland Basalt Group. The Nuussuaq Group comprises ten formations, five of which are erected herein whilst the remainder are redefined or revised in accordance with modern practice. Six of these formations are further divided into members (a total of eighteen, of which fifteen are new) and two beds are formally erected.