The first recorded landing by Europeans on the coast of northern East Greenland (north of 69°N) was that of William Scoresby Jr., a British whaler, in 1822. This volume includes a chronological summary of the pioneer 19th century exploration voyages made by British, Danish, Norwegian, Swedish, French and German expeditions – all of whom reported that the region had previously been occupied by the Inuit or Eskimo; also included are brief outlines of the increasing number of government and privately sponsored expeditions throughout the 20th century, whose objectives included cartography, geology, zoology, botany, trapping and the ascent of the highest mountain summits.

In 1934 the Place Name Committee for Greenland was established, the tasks of which included a review of all place names hitherto recorded on published maps of Greenland, their formal adoption in danicised form, and the approval or rejection of new name proposals. In northern East Greenland, by far the largest numbers of new place names were those proposed by scientists associated with Lauge Koch's geological expeditions that lasted from 1926 until 1958. This volume records the location and origin of more than 3000 officially approved place names as well as about 2650 unapproved names.

The author's interest in the exploration history and place names of northern East Greenland started in 1968, when the Geological Survey of Greenland initiated a major five-year geological mapping programme in the Scoresby Sund region. Systematic compilation of names began about 1970, initially with the names given by William Scoresby Jr., and subsequently broadened in scope to include the names proposed by all expeditions to northern East Greenland. The author has participated in 16 summer mapping expeditions with the Survey to northern East Greenland. Publication of this volume represents the culmination of a lifetime working in the Arctic. 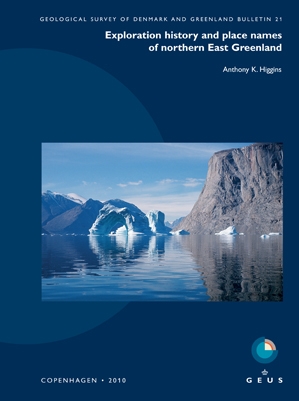