Late Quaternary, marine deposits in Denmark have yielded 247 subfossil species of molluscs. The sites are presented, and comparisons are made between the subfossil mollusc assemblages and the 278 shell-bearing mollusc species presently living in the Danish seas. 184 species are common to the two groups. The 63 species no longer occurring around Denmark are used as indicators of changing environmental conditions, including temperature, salinity and depth, throughout the last 130 000 years. Seven modern faunal regional units are defined and considered: the Bælt, the Baltic, the Kattegat, the Limfjord, the North Sea and the Vendsyssel regions, and the Skagen area based on the Skagen III Well DGU File No. 1.287. The Late Quaternary, marine, shell-bearing molluscs, comprising 341 subfossil and recent species, are characterised from the point of view of climatic (i.e. Arctic, Subarctic, Boreal and Lusitanian) affinities and animal–sediment relationships. On this background the faunal and environmental evolution recorded in the 217 m long Skagen Well core is analysed and described. The mollusc assemblages in the Skagen sequence indicate a deeper-water facies during the Eemian, the Weichselian and the older Holocene in contrast to what hitherto was known in other parts of the Danish area during the Late Quaternary. For the Skagen Well the chronozones Preboreal/Boreal, Atlantic, Subboreal and Subatlantic can be identified by 14C dating. The environmental changes within the seven regions through the Late Quaternary are evaluated by depicting the molluscan communities encountered in the seven Late Quaternary stages together with remarks on studies of the neighbouring areas. By following the marine communities through the Late Quaternary in the light of the classical bottom communities sensu C.G.J. Petersen, it is demonstrated how facies have changed both through time and space within the Danish marine realm. The well-established, more temperate Eemian marine fauna was closely associated with shallow-water environments. The inferred climatic changes reflect an interglacial–glacial cycle. However, the climatically induced changes during the Holocene in the marine environment were small and overshadowed by the facies changes. Out of the 341 species recorded in this study, 140 occur in the Eemian, 36 in the Early/Middle Weichselian and 41 in the Late Weichselian. The Holocene fauna is represented by 183 species of shell-bearing molluscs, of which the first recorded occurrence of 148 species has been radiocarbon-dated. 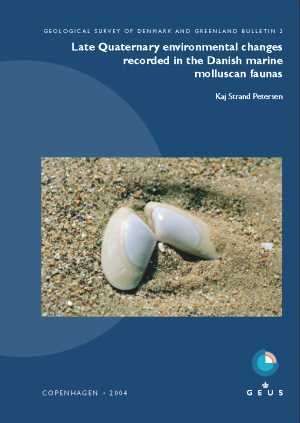