The Rubjerg Knude Glaciotectonic Complex is a thin-skinned thrust-fault complex that was formed during the advance of the Scandinavian Ice Sheet (30 000 – 26 000 B.P.); it is well exposed in a 6 km long coastal profile bordering the North Sea in northern Denmark. The glaciotectonic thrust-fault deformation revealed by this cliff section has been subjected to detailed structural analysis based on photogrammetric measurement and construction of a balanced cross-section. Thirteen sections are differentiated, characterising the distal to proximal structural development of the complex. The deformation affected three stratigraphic units: the Middle Weichselian arctic marine Stortorn Formation, the mainly glaciolacustrine Lønstrup Klint Formation and the dominantly fluvial Rubjerg Knude Formation; these three formations are formally defined herein, together with the Skærumhede Group which includes the Stortorn and Lønstrup Klint Formations. The Rubjerg Knude Formation was deposited on a regional unconformity that caps the Lønstrup Klint Formation and separates pre-tectonic deposits below from syntectonic deposits above.

In the distal part of the complex, the thrust-fault architecture is characterised by thin flatlying thrust sheets displaced over the footwall flat of the foreland for a distance of more than 500 m. Towards the proximal part of the complex, the dip of the thrust faults increases, and over long stretches they are over-steepened to an upright position. The lowest décollement zone is about 40 m below sea level in the proximal part of the system, and shows a systematic step-wise change to higher levels in a distal (southwards) direction. The structural elements are ramps and flats related to hanging-wall and footwall positions. Above upper ramp-hinges, hanging-wall anticlines developed; footwall synclines are typically related to growth-fault sedimentation in syntectonic piggyback basins, represented by the Rubjerg Knude Formation. Blocks and slump-sheets constituting parts of the Lønstrup Klint Formation were derived from the tips of up-thrusted thrust sheets and slumped into the basins. Mud diapirs are a prominent element in the thrust-fault complex, resulting from mud mobilisation mainly at hanging-wall flats and ramps.

Shortening during thrust-fault deformation has been calculated as 50%. Only about 11% of the initial stratigraphic units subjected to thrust faulting has been lost due to erosion. The thrust-fault deformation was caused by gravity spreading of an advancing ice sheet. Overpressured mud-fluid played an important role in stress transmission. The average velocity of thrust-fault displacement is estimated at 2 m per year, which led to compression of a 12 km stretch of flat-lying sediments, c. 40 m in thickness, into a thrust-fault complex 6 km in length. The thrust-fault complex is truncated by a glaciotectonic unconformity, formed when the advancing ice sheet finally overrode the complex. When this ice sheet melted away, a hilland- hole pair was formed, and meltwater deposits derived from a new ice-advance (NE-Ice) filled the depression. The NE-Ice overran the complex during its advance to the main stationary line situated in the North Sea. When this ice in turn melted away (c. 19 000 – 15 000 B.P.), the glacial landscape was draped by arctic marine deposits of the Vendsyssel Formation (new formation defined herein). 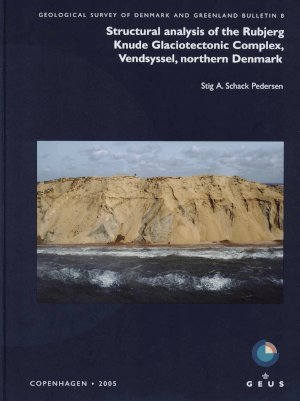