A new Neogene biostratigraphy for Denmark

In Denmark most of the water used in private households, in the industry and for irrigation in agriculture comes from subsurface aquifers. Some of the most important aquifers in Jylland, western Denmark, are sand layers deposited from 23 to 15 Ma ago, in the Early Neogene (Early to Middle Miocene). About 23 Ma ago, in the Early Miocene, the coastline ran NW–SE across present-day Jylland (Rasmussen 2004). Global climatic variations led to major sea-level changes (Zachos et al. 2001), which in combination with increased sediment transport from the north (the present Norway) resulted in deposition of several huge, fluvio-deltaic sand systems intercalated with marine clay (e.g. Rasmussen 1961; Rasmussen 2004; Rasmussen & Dybkjær 2005). The Geological Survey of Denmark and Greenland (GEUS) and the regional Environment Centres (the former counties (amter)) in Jylland are working in close cooperation to study the Early Neogene succession; the main purposes are: (1) to find new aquifers, (2) to map the extent of known aquifers and clarify their mutual relationships, in order to evaluate the size of the water resources and optimise production, and (3) to protect the aquifers from pollution due to leaching from the surface. In order to map the complex sedimentary succession, it has been necessary to combine several geological disciplines, including seismic interpretation, sedimentology, correlation of geophysical logs, and biostratigraphy (e.g. Dybkjær 2004; Rasmussen 2004; Rasmussen et al. 2004; Piasecki 2005; Rasmussen & Dybkjær 2005; Dybkjær & Rasmussen 2007). This article shows some results of a detailed dinoflagellate cyst stratigraphy, which is based on an extensive database (Fig. 1). We present here for the first time a dinoflagellate cyst zonation for the complete Neogene succession in the Danish area. 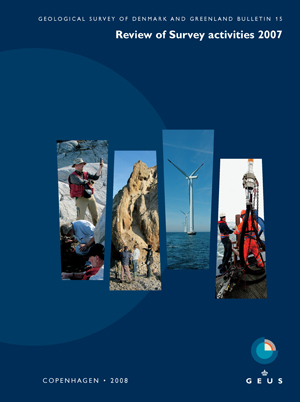