Ultrabasic alkaline magmatic rocks are products of melts generated deep within or at the base of the lithospheric mantle. The magmas may reach the surface to form lavas and pyroclastic deposits; alternatively they crystallise at depth to form dykes or central complexes. The rocks are chemically distinct and may contain high concentrations of economically interesting minerals and chemical elements, such as diamonds, niobium, tantalum, rare earth elements, phosphorus, iron, uranium, thorium, and zirconium. Ultrabasic alkaline rocks are known from several provinces in Greenland, but extrusive facies have only been preserved at a few places; e.g. at Qassiarsuk in South Greenland where pyroclastic rocks occur, and in the Maniitsoq region, where a small volcanic breccia (‘Fossilik’) contains fragments of Palaeozoic limestone. Ultramafic lamprophyre and kimberlite are mainly emplaced as dykes, whereas carbonatite forms large intrusive bodies as well as dykes. The ultrabasic alkaline magmas that have been emplaced at certain times during the geological evolution of Greenland can be related to major episodes of continental break-up (Larsen & Rex 1992). The oldest are Archaean and the youngest dated so far are Palaeogene. Figure 1 shows the distribution of known ultrabasic alkaline rocks in West Greenland. The large and well-exposed bodies of alkaline rocks and carbonatites in the Gardar Province were discovered already in the early 1800s (Ussing 1912), while less conspicuous bodies were discovered much later during geological mapping and mineral exploration. Many alkaline rock bodies, particularly dykes, are difficult to identify in the field because they weather more extensively than the country rock gneisses and form vegetated depressions in the landscape. However, their distinct chemistry and mineralogy render alkaline rocks identifiable in geochemical and geophysical survey data. Thus, the Sarfartôq carbonatite complex was discovered during regional airborne gamma-spectrometric surveying owing to its elevated uranium and thorium contents (Secher 1986). The use of kimberlite indicator minerals has led to the discovery of alkaline rocks such as kimberlites and ultramafic lamprophyres that carry fragments of deep lithospheric mantle. Such rocks may also contain diamonds. Kimberlite indicator minerals are high-pressure varieties of minerals, such as garnet, clinopyroxene, chromite and ilmenite that were formed in the lithospheric mantle. Exploration companies have processed thousands of till samples from southern West Greenland for kimberlite indicator minerals and found many new dykes. 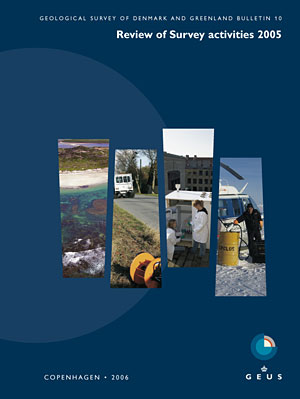