The Palaeogene North Atlantic Igneous Province is among the largest igneous provinces in the world and this review of the East Greenland sector includes large amounts of information amassed since previous reviews around 1990.

The main area of igneous rocks extends from Kangerlussuaq (c. 67°N) to Scoresby Sund (c. 70°N), where basalts extend over c. 65 000 km2 , with a second area from Hold with Hope (c. 73°N) to Shannon (c. 75°N). In addition, the Ocean Drilling Project penetrated basalt at five sites off South-East Greenland. Up to 7 km thickness of basaltic lavas have been stratigraphically and chemically described and their ages determined. A wide spectrum of intrusions are clustered around Kangerlussuaq, Kialeeq (c. 66°N) and Mesters Vig (c. 72°N). Layered gabbros are numerous (e.g. the Skaergaard and Kap Edvard Holm intrusions), as are under- and oversaturated syenites, besides small amounts of nephelinite-derived products, such as the Gardiner complex (c. 69°N) with carbonatites and silicate rocks rich in melilite, perovskite etc. Felsic extrusive rocks are sparse. A single, sanidine-bearing tuff found over an extensive area of the North Atlantic is thought to be sourced from the Gardiner complex.

The province is famous for its coast-parallel dyke swarm, analogous to the sheeted dyke swarm of ophiolites, its associated coastal flexure, and many other dyke swarms, commonly related to central intrusive complexes as in Iceland. The dyke swarms provide time markers, tracers of magmatic evolution and evidence of extensional events. A set of dykes with harzburgite nodules gives unique insight into the Archaean subcontinental lithosphere.

Radiometric dating indicates extrusion of huge volumes of basalt over a short time interval, but the overall life of the province was prolonged, beginning with basaltic magmas at c. 60 Ma and continuing to the quartz porphyry stock at Malmbjerg (c. 72°N) at c. 26 Ma. Indeed, activity was renewed in the Miocene with the emplacement of small volumes of basalts of the Vindtoppen Formation to the south of Scoresby Sund.

Although the basalts were extruded close to sea level, this part of East Greenland is a plateau raised to c. 2 km, but the timing of uplift is controversial. Superimposed on the plateau is a major dome at Kangerlussuaq.

East Greenland presents a rich interplay between magmatic and tectonic events reflecting the birth of the North Atlantic Ocean. It was active over a much longer period (36 Ma) than other parts of the province (5 Ma in the Hebrides, Northern Ireland and the Faroe Islands) and contains a wider range of products, including carbonatites, and felsic rocks tend to be granitic rather than syenitic. As expected, there are many similarities with Iceland, the present-day expression of activity in the province. Differences are readily explained by higher production rates and the thicker lithospheric lid during the early stages of development in East Greenland. The igneous and related activity clearly results from plate-tectonic factors, but the relationship is not understood in detail. In particular, the nature of the underlying mantle processes, primarily the presence or absence of a plume, is still not resolved. 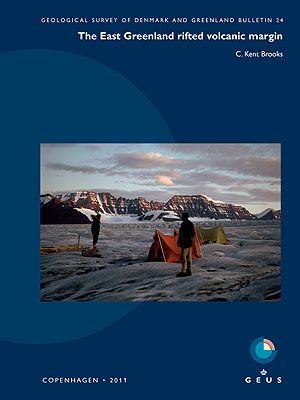