The 1300–1140 Ma Gardar period in South Greenland involved continental rifting, sedimentation and alkaline magmatism. The latest magmatism was located along two parallel rift zones, Isortoq–Nunarsuit in the north and the Tuttutooq–Ilimmaasaq–Narsarsuaq zone in the south addressed here. The intrusive rocks crystallised at a depth of troctolitic gabbros. These relatively reduced magmas evolved through marked iron enrichment to alkaline salic differentiates. In the Older giant dyke complex, undersaturated augite syenites grade into sodalite foyaite. The larger, c. 1163 Ma Younger giant dyke complex (YGDC) mainly consists of structureless troctolite with localised developments of layered cumulates. A layered pluton (Klokken) is considered to be coeval and presumably comagmatic with the YGDC. At the unconformity between the Ketilidian basement and Gardar rift deposits, the YGDC expanded into a gabbroic lopolith. Its magma may represent a sample from a great, underplated mafic magma reservoir, parental to all the salic alkaline rocks in the southern rift. The bulk of these are silica undersaturated; oversaturated differentiates are probably products of combined fractional crystallisation and crustal assimilation.

Abundant anorthositic xenoliths in the mafic and intermediate intrusions point to a large anorthosite protolith at depth which is considered of critical importance in the petrogenesis of the salic rocks. Small intrusions of aillikite and carbonatite may represent remobilised mantle metasomites. The petrological similarity between Older and Younger Gardar suites implies strong lithospheric control of their petrogenesis. The parental magmas are inferred to have been derived from restitic Ketilidian lithospheric mantle, metasomatised by melts from subducting Ketilidian oceanic crust and by small-scale melt fractions associated with Gardar rifting.

There are numerous analogies between the southern Gardar rift and the Palaeogene East African rift. 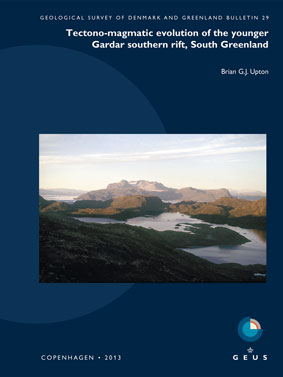