The Jurassic of East Greenland: a sedimentary record of thermal subsidence, onset and culmination of rifting

The Late Palaeozoic – Mesozoic extensional basin complex of East Greenland contains a record of deposition during a period of Rhaetian – Early Bajocian thermal subsidence, the onset of rifting in the Late Bajocian, its growth during the Bathonian–Kimmeridgian, culmination of rifting in the Volgian – Early Ryazanian, and waning in the Late Ryazanian – Hauterivian. The area was centred over a palaeolatitude of about 45°N in the Rhaetian and drifted northwards to about 50°N in the Hauterivian. A major climate change from arid to humid subtropical conditions took place at the Norian–Rhaetian transition. Deposition was in addition governed by a long-term sea-level rise with highstands in the Toarcian–Aalenian, latest Callovian and Kimmeridgian, and lowstands in the latest Bajocian – earliest Bathonian, Middle Oxfordian and Volgian. The Rhaetian – Lower Bajocian succession is considered the upper part of a megasequence, termed J1, with its base in the upper Lower Triassic, whereas the Upper Bajocian – Hauterivian succession forms a complete, syn-rift megasequence, termed J2. The southern part of the basin complex in Jameson Land contains a relatively complete Rhaetian–Ryazanian succession and underwent only minor tilting during Middle Jurassic – earliest Cretaceous rifting. Rhaetian – Lower Jurassic deposits are absent north of Jameson Land and this region was fragmented into strongly tilted fault blocks during the protracted rift event. The syn-rift successions of the two areas accordingly show different long-term trends in sedimentary facies. In the southern area, the J2 syn-rift megasequence forms a symmetrical regressive–transgressive–regressive cycle, whereas the J2 megasequence in the northern area shows an asymmetrical, stepwise deepening trend. A total of eight tectonostratigraphic sequences are recognised in the Rhaetian–Hauterivian interval. They reflect major changes in basin configuration, drainage systems, sediment transport and distribution patterns, and in facies and depositional environments. The sequences are bounded by regional unconformities or flooding surfaces and have average durations in the order of 10 Ma. They are subdivided into conventional unconformity-bounded depositional sequences with durations ranging from tens of thousands of years, in the Milankovitch frequency band, up to several million years. Deposition was alluvial and lacustrine in the Rhaetian–Sinemurian, but almost exclusively marine during the Pliensbachian–Hauterivian time interval when a marine strait, up to 500 km wide and more than 2000 km long, developed between Greenland and Norway, connecting the Arctic Sea and the North Sea. Coal-bearing fluvial and paralic deposits occur, however, at the base of the onlapping Middle Jurassic succession in the central and northern part of the basin complex. The sedimentary development is similar to that in the Northern North Sea and on the Norwegian shelf, and East Greenland offers important onshore analogues for virtually all of the types of deeply buried Jurassic depositional systems of these areas and especially their hydrocarbon reservoirs. 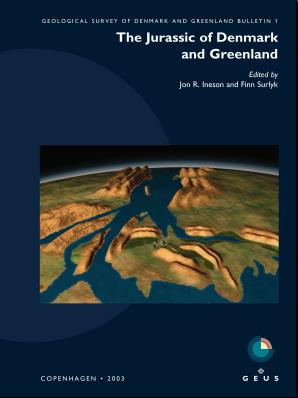