The continental margin of West Greenland is similar in many respects to other elevated, passive continental margins (EPCMs) around the world. These margins are characterised by extensive regions of low relief at elevations of 1–2 kilometres above sea level sloping gently inland, with a much steeper, oceanward decline, often termed a 'Great Escarpment', terminating at a coastal plain. Recent studies, based on integration of geological, geomorphological and thermochronological evidence, have shown that the high topography of West Greenland was formed by differential uplift and dissection of an Oligo-Miocene peneplain since the late Miocene, many millions of years after continental break-up between Greenland and North America. In contrast, many studies of other EPCMs have proposed a different style of development in which the high plateaux and the steep, oceanward decline are regarded as a direct result of rifting and continental separation. Some studies assume that the elevated regions have remained high since break-up, with the high topography continuously renewed by isostasy. Others identify the elevated plains as remnants of pre-rift landscapes. Key to understanding the development of the West Greenland margin is a new approach to the study of landforms, stratigraphic landscape analysis, in which the low-relief, high-elevation plateaux at EPCMs are interpreted as uplifted peneplains: low-relief surfaces of large extent, cutting across bedrock of different age and resistance, and originally graded to sea level. Identification of different generations of peneplain (re-exposed and epigene) from regional mapping, combined with geological constraints and thermochronology, allows definition of the evolution leading to the formation of the modern-day topography. This approach is founded particularly on results from the South Swedish Dome, which document former sea levels as base levels for the formation of peneplains. These results support the view that peneplains grade towards base level, and that in the absence of other options (e.g. widespread resistant lithologies), the most likely base level is sea level. This is particularly so at continental margins due to their proximity to the adjacent ocean. Studies in which EPCMs are interpreted as related to rifting or break-up commonly favour histories involving continuous denudation of margins following rifting, and interpretation of thermochronology data in terms of monotonic cooling histories. However, in several regions, including southern Africa, south-east Australia and eastern Brazil, geological constraints demonstrate that such scenarios are inappropriate, and an episodic development involving post-breakup subsidence and burial followed later by uplift and denudation is more realistic. Such development is also indicated by the presence in sedimentary basins adjacent to many EPCMs of major erosional unconformities within the post-breakup sedimentary section which correlate with onshore denudation episodes. The nature of the processes responsible is not yet understood, but it seems likely that plate-scale forces are required in order to explain the regional extent of the effects involved. New geodynamic models are required to explain the episodic development of EPCMs, accommodating post-breakup subsidence and burial as well as subsequent uplift and denudation, long after break-up which created the characteristic, modern-day EPCM landscapes. 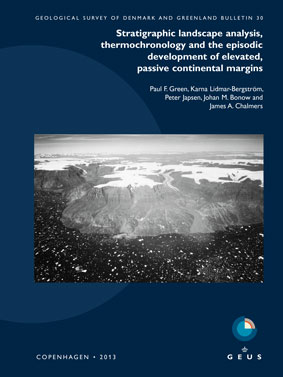