A catalogue of Danian gastropods from the Baunekule facies, Faxe Formation, Denmark

The Faxe Formation is recognised as a cold-water coral ecosystem with interfingering smaller bryozoan mounds. The Baunekule facies is found in the upper part of the coral mound complex of the Faxe Formation, where it forms isolated lensoidal bodies in the flanks of some of the coral mounds. It is characterised by a high diversity invertebrate fauna that occurs in weakly consolidated coraldominated floatstone to rudstone. The diagenesis of the Baunekule facies is of special significance because a high proportion of the originally aragonite-shelled fauna is preserved by recrystallization to calcite during early burial diagenesis. Most of the gastropods are not known from other parts of the Faxe Fm. The fauna is very important for comparative evolutionary studies of fossil and modern gastropods on cold-water coral mounds. Many of the genera have not previously been recorded from Danian strata. None of the gastropod species found in the Baunekule facies are known for certain to range below the Cretaceous–Palaeogene boundary. The fauna is comparable to gastropods found on modern cold-water coral mounds in the North Atlantic.

The gastropod fauna from the Baunekule facies is characterised by a very high diversity of rather small millimetre-sized gastropods with a preference for hard substrates; 63.9% of the taxa belong to the browsing carnivore trophic group, feeding mainly on sedentary animals. Surprisingly, the fauna contains some common occurrences of typically warm-water species. The fauna consists mostly of Cenozoic genera and up to 87% of the species may be endemic to the cold-water coral ecosystem of the Faxe Formation. The diverse and rather unusual gastropod fauna from the Baunekule facies is undoubtedly linked to the evolution of cold-water coral ecosystems. 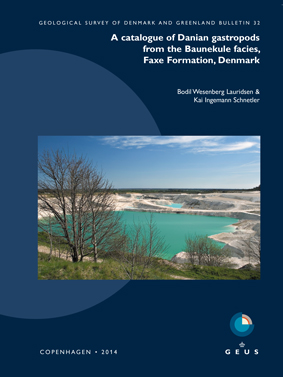