New analyses of the palynological assemblages in 13 offshore wells on the Canadian margin and six on the West Greenland Margin, in conjunction with onshore data, have led to a new biostratigraphic framework for the Cretaceous–Cenozoic strata of the Labrador Sea – Davis Strait – Baffin Bay (Labrador–Baffin Seaway) region and the first broad biostratigraphic correlation of the Canadian and Greenland margins. This framework is based on 167 last occurrences and 18 local/regional peak/common-occurrence events for dinocysts, miospores, fungal spores and Azolla. Detailed biostratigraphic evidence has confirmed the following hiatuses: pre-Aptian in the Hopedale Basin; pre-Albian in the Saglek Basin; Albian–Turonian in some wells of the Hopedale Basin; Turonian–Santonian/Campanian in some areas; pre-Campanian and late Campanian – Thanetian on the Greenland Margin; late Maastrichtian and Danian in some wells of the Hopedale Basin and in the Saglek Basin; Selandian in part of the Hopedale Basin, in all the Saglek Basin wells and in two wells on the West Greenland Margin; late Ypresian and/or Lutetian on both sides; Oligocene to middle Miocene of considerable variability on both margins, with all of the Oligocene and the lower Miocene missing in all the West Greenland Margin wells; and middle to late Miocene on the western side. On the Canadian margin, the hiatuses can be partially matched with the five previously recognised regional unconformities; on the Greenland margin, however, the relationship to the five unconformities is more tenuous. Palynomorph assemblages show that most Aptian to Albian sediments were deposited in generally non-marine to marginal marine settings, interrupted by a short-lived shallow marine episode in the Aptian. A marine transgression started in the Cenomanian–Turonian and led to the most open-marine, oceanic conditions in the Campanian–Lutetian; shallowing probably started in the late Lutetian and continued into the Rupelian, when inner neritic and marginal marine palaeoenvironments predominated. Throughout the rest of the Cenozoic, inner neritic palaeoenvironments alternated with marginal marine conditions on the margins of the Labrador–Baffin Seaway. These observations broadly reflect the tectonic evolution of the seaway, with rift conditions prevailing from Aptian to Danian times, followed by drift through much of the Paleocene and Eocene, and post-drift from Oligocene to the present. Dinocysts indicate that climatic conditions in the Labrador–Baffin Seaway region were relatively temperate in the Cretaceous, but varied dramatically through the Cenozoic. The Danian was a time of increasingly warmer climate, a thermal maximum being reached around the Paleocene–Eocene boundary reflecting the global thermal event at this time. Warm to hot conditions prevailed throughout the Ypresian, but the climate began to cool in the Lutetian, a trend that accelerated through the Priabonian and Rupelian. Throughout the Neogene, temperatures generally declined, culminating in the Quaternary. 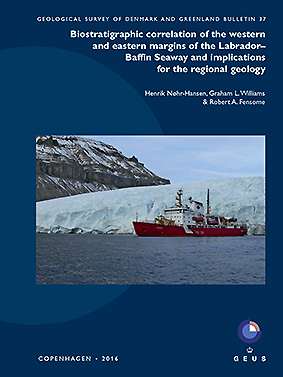 Vol. 37 (2017): Biostratigraphic correlation of the western and eastern margins of the Labrador–Baffin Seaway and implications for the regional geology