Lithostratigraphy, geology and geochemistry of the volcanic rocks of the Vaigat Formation on Disko and Nuussuaq, Paleocene of West Greenland

The Paleocene volcanic rocks in the Nuussuaq Basin on Disko and Nuussuaq comprise the Vaigat Formation (c. 62–61 Ma) and the Maligât Formation (c. 60 Ma). The Vaigat Formation in this area is 0–1600 m thick and is dominated by olivine-rich picrites. The formation was deposited during three volcanic episodes and is divided into 10 formally defined members and about 20 informal units. The first episode gave rise to the Anaanaa Member. The second episode gave rise to the Naujánguit Member, which is intercalated with the minor, crustally contaminated Nuusap Qaqqarsua, Nuuk Killeq, Asuk, Tunoqqu and Kûgánguaq members and the uncontaminated Qordlortorssuaq Member. The third episode gave rise to the Ordlingassoq Member and the minor alkaline Manîtdlat Member. Contemporaneous sediments deposited during the first two episodes are the marine Eqalulik Formation, and during the third episode the nonmarine Atanikerluk Formation. During the second episode, the polarity of the geomagnetic field changed from normal (Chron C27n) via a transition zone to reversed (C26r).

The deposits of the first volcanic episode are situated on western Nuussuaq. During the second and third episodes, the volcanism gradually spread eastwards and southwards so that the Vaigat Formation now forms a domed structure, thickest in the north, thinning out on northern Disko and reaching eastwards to the high gneiss country on central Nuussuaq. The earliest eruptions took place on the sea floor and quickly built up a subaerial lava plateau. All three episodes gave rise to complicated facies changes between subaqueous and subaerial eruption products caused by the eastmoving volcanism, subsidence, volcanic aggradation and blockage of the sea connection against the elevated eastern gneiss country. Eruption sites are widespread for all three volcanic episodes. Within certain time periods, a number of contemporaneous high-level magma reservoirs developed within sediments of the Nuussuaq Group, and the crustally contaminated members formed in these reservoirs by reaction between Mg-rich magmas and sediments.

Present-day seeps of migrated oil are widespread in the oldest part of the volcanic succession on western Nuussuaq. Some of the contaminated magmas in the Asuk and Kûgánguaq members have fractionated sulfides with Cu and Ni and have been explored for nickel and platinum-group elements. 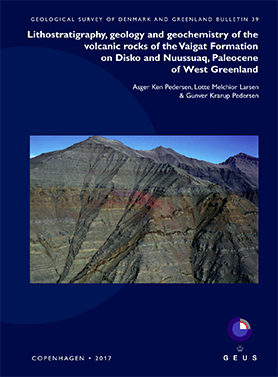 Vol. 39 (2017): Lithostratigraphy, geology and geochemistry of the volcanic rocks of the Vaigat Formation on Disko and Nuussuaq, Paleocene of West Greenland