Lithostratigraphy, geology and geochemistry of the volcanic rocks of the Maligât Formation and associated intrusions on Disko and Nuussuaq, Paleocene of West Greenland

The Rinks Dal Member is the lowest member and originally constituted around 61% by volume of the formation. It is divided into 12 informal units based on chemically recognisable oscillations in the fractionation state of the basalts. The oldest units are present on central and south Disko close to the Disko Gneiss Ridge. The younger lavas spread farther to the east, north and west, filled the Assoq Lake basin east of the ridge and gradually onlapped the shield of the earlier Vaigat Formation that rose to the north. Only the lavas of the upper Rinks Dal Member reached far into Nuussuaq. The lavas are generally not crustally contaminated and comprise evolved basalts with 4.4–9.2 wt% MgO and a few picrites. The most evolved basalts with 3.2–4.8 wt% TiO2 occur in the middle part of the member where they form the Akuarut unit.

The Nordfjord Member originally constituted around 6% by volume of the formation. It is not subdivided because the lithological variability is local. The member is widespread but has its depocentre on north-western Disko where thicknesses reach 350 m and eruption sites, intermediate lavas and acid tuffs are present. Over most of the area the member consists of just a few lava flows with combined thicknesses of 30–100 m. The member has a very diverse lithology with rock types ranging from silicic basalt with 5.3–10.0 wt% MgO through magnesian basaltic andesite and andesite with 2.4–10.6 wt% MgO to dacite with 1.2–2.2 wt% MgO. Rhyolite with 0.2–1.2 wt% MgO and up to 77 wt% SiO2 occur in tuffs and conglomerate clasts. All rocks are crustally contaminated and some are native-iron-bearing.

The Niaqussat Member originally constituted around 33% by volume of the formation. It is subdivided into three informal units. The member is widespread, but much of it has been removed by erosion. Lithologies in the lower unit range from silicic picrite with up to 15 wt% MgO to basalt with 6–12 wt% MgO and a few basaltic andesite flows. The middle and upper parts of the Niaqussat Member comprise more evolved basalts with respectively 6.1–7.2 wt% MgO and 4.9–6.4 wt% MgO. All rocks are crustally contaminated and a few lava flows are native-iron-bearing.

The Sapernuvik Member comprises three uncontaminated basalt flows with 7.5–10.7 wt% MgO. It is only preserved in a small area on western Disko.

Dyke systems with up to 80 km long dykes and subvolcanic intrusions associated with the Nordfjord and Niaqussat members occur on western and north-eastern Disko. The rocks are crustally contaminated and range from silicic basalt with 4–13 wt% MgO to magnesian andesite with 3–10 wt% MgO. They commonly form composite intrusions, some of which contain accumulations of native iron and sulfides.

The contaminants are carbon- and sulfur-bearing sediments of the Nuussuaq Group. Major contamination mechanisms were mixing with partial melts from the sediment sidewall and xenoliths and selective exchange of some elements, including carbon and sulfur, between magma and sediment. Degrees of contamination vary from 2−5% in the basalts to 10−50% in the more silicic rocks. No rocks more evolved than basalt were produced by ordinary fractional crystallisation. 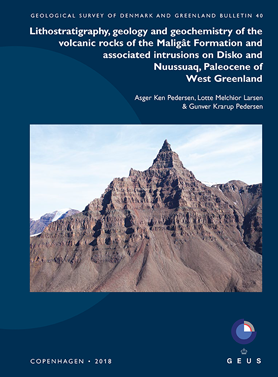 Vol. 40 (2018): Lithostratigraphy, geology and geochemistry of the volcanic rocks of the Maligât Formation and associated intrusions on Disko and Nuussuaq, Paleocene of West Greenland