This bulletin presents a series of nine papers dealing with the succession of Upper Jurassic – Lower Cretaceous sedimentary rocks penetrated by the fully cored Blokelv-1 borehole, drilled in western Jameson Land, central East Greenland in August 2008. The borehole was drilled as the first of three boreholes that in combination were designed to provide full coverage of the Upper Jurassic – Lower Cretaceous petroleum source-rock succession in eastern Greenland. The remaining two boreholes, Rødryggen-1 and Brorson Halvø-1, were drilled on Wollaston Forland in 2009 and 2010, respectively, and the results from these boreholes will be published in a companion volume. The objectives of the drilling campaign were fulfilled, demonstrating that continuous sedimentation of oil-prone petroleum source rocks took place in eastern Greenland over a period of c. 13 million years from the Oxfordian to the Ryazanian, with the Blokelv-1 succession representing the older, Oxfordian–Volgian part of this interval.

The drilling campaign was carried out as one of a number of projects within the framework of a multi-client collaborative programme between GEUS and a long list of petroleum companies entitled Petroleum Geological Studies, Services and Data in East and Northeast Greenland. This collaboration was initiated in 2007 and is ongoing at the time of writing with more than 20 participant companies, a subset of which sponsored the studies presented herein; for contractual reasons, these companies cannot be named. The GEUS–industry collaboration was initiated in recognition of the need for new and better data on many aspects of the petroleum geology of eastern Greenland prior to an anticipated licensing round of offshore North-East Greenland. The Circum-Arctic Resource Appraisal (CARA), undertaken by the United States Geological Survey (USGS), also played an important role in defining the priorities of the collaborative agreement by directing attention towards specific subjects in need of investigation. Licensing rounds in 2012 and 2013 resulted in the award of five licences.

Based on the results of these activities in eastern Greenland, a large number of scientific papers have been published since 2008, and more are expected as confidentiality clauses expire. This volume is, however, the first GEUS Bulletin to be published as a direct consequence of the GEUS–industry collaboration. 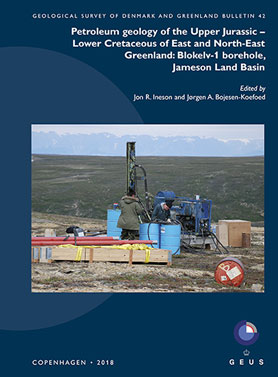