Greenland from Archaean to Quaternary. Descriptive text to the Geological map of Greenland, 1:2 500 000

NOTE: This monograph was published in a former series of GEUS Bulletin. Please use the original series name when citing this monograph, for example:

The geological development of Greenland spans a period of nearly 4 Ga, from the earliest Archaean to the Quaternary. Greenland is the largest island in the world with a total area of 2 166 000 km2, but only c. 410 000 km2 are exposed bedrock, the remaining part being covered by an inland ice cap reaching over 3 km in thickness. The adjacent offshore areas underlain by continental crust have an area of c. 825 000 km2. Greenland is dominated by crystalline rocks of the Precambrian shield, which formed during a succession of Archaean and early Proterozoic orogenic events and which stabilised as a part of the Laurentian shield about 1600 Ma ago. The shield area can be divided into three distinct types of basement provinces: (1) Archaean rocks (3100-2600 Ma old, with local older units) almost unaffected by Proterozoic or later orogenic activity; (2) Archaean terraines reworked during the early Proterozoic around 1850 Ma ago; and (3) terraines mainly composed of juvenile early Proterozoic rocks (2000-1750 Ma old). Subsequent geological developments mainly took place along the margins of the shield. During the later Proterozoic and throughout the Phanerozoic major sedimentary basins formed, notably in North and North-East Greenland, and in places accumulated sedimentary successions which reached 10-15 km in thickness. Palaeozoic orogenic activity affected parts of these successions in the Ellesmerian fold belt of North Greenland and the East Greenland Caledonides; the latter also incorporates reworked Precambrian crystalline basement complexes. Late Palaeozoic and Mesozoic sedimentary basins developed along the continent-ocean margins in North, East and West Greenland and are now preserved both onshore and offshore. Their development was closely related to continental break-up with formation of rift basins. Initial rifting in East Greenland in latest Devonian to earliest Carboniferous time and succeeding phases culminated with the opening of the North Atlantic in the late Paleocene. Sea-floor spreading was accompanied by extrusion of Tertiary plateau basalts in both central West and central and southern East Greenland. During the Quaternary Greenland was almost completely covered by ice sheets, and the present Inland Ice is a relic of the Pleistocene ice ages. Vast amounts of glacially eroded detritus were deposited on the continental shelves offshore Greenland. Mineral exploitation in Greenland has so far mainly been limited to one cryolite mine, two lead-zinc deposits and one coal deposit. Current prospecting activities in Greenland are concentrated on the gold, diamond and lead-zinc potential. The hydrocarbon potential is confined to the major Phanerozoic sedimentary basins, notably the large basins offshore East and West Greenland. While proven reserves of oil or gas have yet to be found, geophysical data combined with extrapolations from onshore studies have revealed a considerable potential for offshore oil and gas. The description of the map has been prepared with the needs of the professional geologist in mind; it requires a knowledge of geological principles but not previous knowledge of Greenland geology. Throughout the text reference is made to the key numbers in the map legend indicated in square brackets [ ] representing geological units (see Legend explanation, p. 79), while a Place names register (p. 83) and an Index (p. 87) include place names, geological topics, stratigraphic terms and units found in the legend. The extensive reference list is intended as a key to the most relevant information sources. 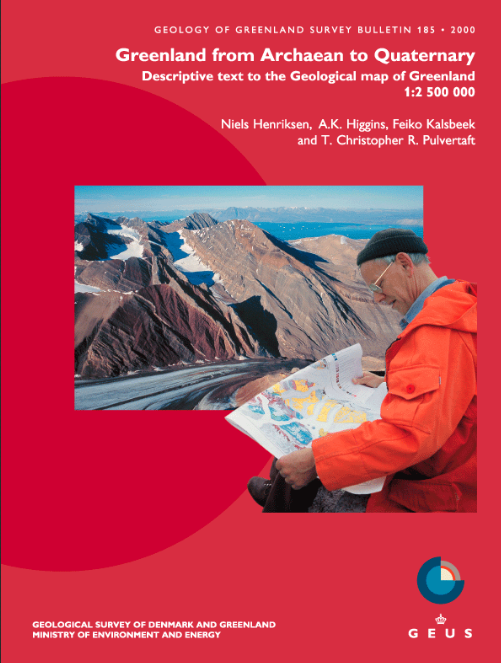