NOTE: This article was published in a former series of GEUS Bulletin. Please use the original series name when citing this article, for example:

The stratigraphic borehole Umiivik-1 on Svartenhuk Halvø was drilled in August–September 1995 as part of a joint programme between the Government of Greenland, Minerals Office (now Bureau of Minerals and Petroleum) and the Danish State (Mineral Resources Administration for Greenland). The joint programme was based on a political decision from November 1994 made in order to attract the oil and mineral industry to Greenland. The drilling of Umiivik-1 is one of several petroleum geological projects in West Greenland that were initiated early in 1995. Analyses on the core include detailed sedimentological, palynological and organic geochemical studies. The other petroleum geological projects comprise: description and interpretation of the three exploration boreholes on Nuussuaq, GANT#1, GANE#1 and GANK#1 that the Canadian oil company grønArctic Energy Inc. drilled in the summer of 1995 (e.g. Christiansen et al. 1996a, c; Dam 1996a–c; NøhrHansen 1997a); seismic surveys in the fjords around Disko, Nuussuaq and Svartenhuk Halvø (FjordSeis 95); seismic surveys in the offshore area between 68° and 71°N (DiskoSeis 95); and seismic surveys in the offshore area south of 68°N (IkerSeis 95, KangaSeis 95 and ExtraSeis 95; Chalmers et al. 1998, this volume; Skaarup & Chalmers 1998, this volume). The prime objective of Umiivik-1 was to document oil-prone source rocks in mid-Cretaceous strata. Although several types of crude oil have been found in seeps and slim-hole cores in West Greenland since 1992, there was only limited knowledge on actual source rocks when the project was initiated. Detailed organic geochemistry, especially the distribution of biomarkers in seeping oils, provides important information on the type of organic material, the depositional environment and the thermal history of the source rocks that generated these oils (Christiansen et al. 1996b, 1997b; Bojesen-Koefoed et al. in press). However, there are only limited data on thickness, areal distribution, generative potential, and stratigraphic age of the actual source rocks. Considering the exploration possibilities in West Greenland, the presence of source rocks seems to be one of the main risk elements, if not the most critical factor. It was therefore generally accepted in 1994 that the level of exploration interest in West Greenland would strongly benefit from the actual demonstration of the existence, age and depositional environment of oil-prone source rocks and by quantifying their generation potential. The most likely candidate in this context was a possible mid-Cretaceous marine source rock (Cenomanian–Turonian) that was first suggested in West Greenland by Chalmers et al. (1993) on the basis of world-wide analogies, but later supported by direct data from Ellesmere Island in Arctic Canada (Núñez-Betelu 1994). The Svartenhuk Halvø area is one of the few areas where Upper Cretaceous and Lower Tertiary marine sediments are exposed onshore West Greenland (Fig. 1), and the mudstones outcropping on Svartenhuk Halvø are the oldest known, fully marine deposits from West Greenland (Birkelund 1965; Nøhr-Hansen 1996). These mudstones have recently been studied during field work by the Geological Survey of Greenland in 1991 and 1992, a programme which also included five shallow boreholes between 66 and 86 m deep (Fig. 1; Christiansen 1993; Christiansen et al. 1994). Based on analytical work from these cores and samples from nearby outcrops, thermally immature mudstones of Coniacian to Early Santonian age have been documented (Nøhr-Hansen 1996), thereby giving hope that immature or early mature sediments of Cenomanian– Turonian age could be reached by drilling to relatively shallow depths along the southern shoreline of Umiiviup Kangerlua (Fig. 1). 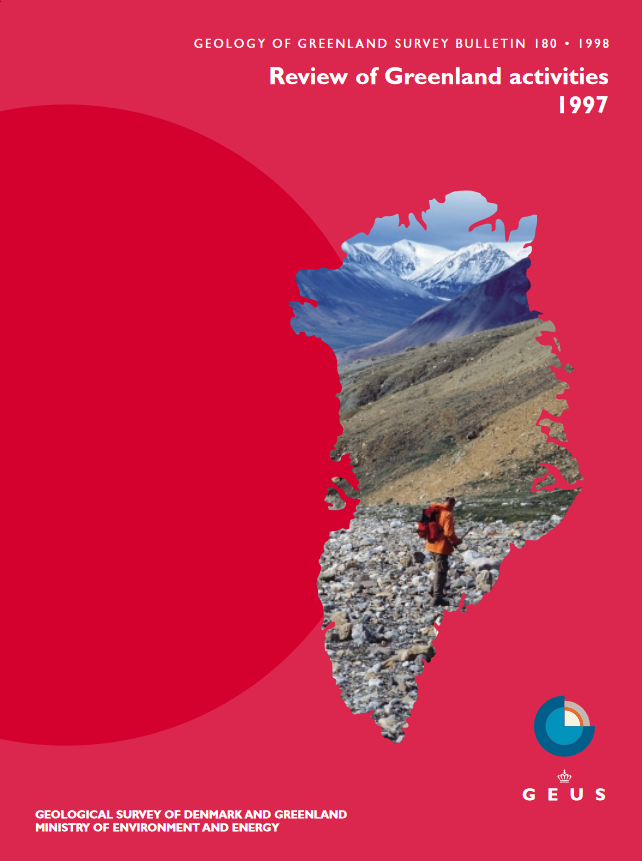 Geological Survey of Denmark and Greenland (GEUS) Bulletin is a peer-reviewed, open access journal published by the Geological Survey of Denmark and Greenland. We publish geoscience research papers, monographs and map descriptions for Denmark, Greenland and the Arctic region. GEUS Bulletin believes that open science benefits scientists, industry and society. We do not charge publication fees and all our articles can be freely downloaded online.