NOTE: This monograph was published in a former series of GEUS Bulletin. Please use the original series name when citing this monograph, for example:

A new lithostratigraphic scheme for the Proterozoic (Neohelikian-Hadrynian) intracratonic Thule Basin of northern Baffin Bay is presented. This basin, preserved between 76° and 79° N in Greenland and Ellesmere Island, Canada, contains little deformed and unmetamorphosed strata at least 6 km thick that are referred to the Thule Supergroup. The succession is composed of continental to shallow marine sediments with prominent red bed units, and one main interval of basaltic volcanic rocks. Diabase sills representing both the Mackenzie (Neohelikian) and Franklin (Hadrynian) magmatic episodes occur at certain levels.

The bulletin has three main parts. The forerunner of the new supergroup, the Thule Group, is infamous for the nomenclatorial chaos that has surrounded its use. Consequently the first part is a historical summary as background to the definitive nomenclatorial revision. The second and main part on lithostratigraphy splits the Thule Supergroup into 36 formal divisions: 5 groups, 15 formations and 16 members. Twenty geological maps show the regional distribution of the defined units that are represented by 78 stratigraphic logs and sections. The third part summarises basin development as a restricted or semi-restricted depocentre on the northern margin of the Canadian-Greenlandic shield. Evolution was controlled by block faulting and basin sagging in a divergent plate regime.

The Smith Sound Group, up to 700 m thick, represents the northern platform and basin margin equivalent of the Nares Strait and Baffin Bay Groups of the central basin. Composed of sandstones and shales with subordinate stromatolitic carbonates, the Smith Sound Group represents an overall shelf environment with long-lasting conditions for shallow water to subaerial deposition. Supratidal to marginally marine and intermittently lacustrine sedimentation prevailed.

The Nares Strait Group, up to 1200 m thick and representing the basal strata of the central basin, is composed of sandstones and basaltic volcanics including flows, sills and volcaniclastic deposits, as well as shale- and carbonate-dominated intervals. The Group represents deposition in alluvial plain, littoral and offshore environments, with accompanying terrestrial tholeiitic volcanicity.
The Baffin Bay Group, overlying conformably the previous group, represents the most widespread strata of the Thule Basin reaching a maximum thickness of up to 1300 m. Sandstones and quartz-pebble conglomerates, with important intervals of shales and siltstones, represent mixed continental to marine shoreline environments with an interval of deeper water deposition, possibly in a prodelta or offshore basin.

The Dundas Group, 2 to 3 km thick and following the previous group along a gradational contact, comprises sandstones, siltstones and shales with lesser amounts of carbonate and evaporit. Deposition was in an overall deltaic to offshore environment.

The youngest strata, the Narssarssuk Group, 1.5 to 2.5 km thick, are preserved in a graben on the south-eastern margin of the basin. The cyclic carbonate - red bed siliciclastic sequence with evaporites represents deposition in a low-energy, hypersaline, peritidal environment in conditions perhaps analogous to modern coastal sabkhas. 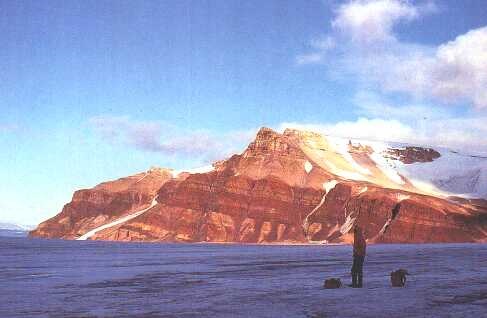