NOTE: This monograph was published in a former series of GEUS Bulletin. Please use the original series name when citing this monograph. For example:

New data from five wells in the Søgne Basin, Danish Central Graben of the North Sea - West Lulu-1, West Lulu-3, Lulu-1, Amalie-1 and Cleo-1 - together with previously released data from the West Lulu-2 well, show that the cumulative thickness of the Bryne Formation coal seams decreases towards the palaeo-shoreline from 5.05 m to 0.60 m, and that the seams have varying extents. Their overall organic petrographic and geochemical composition reflects the palaeoenvironmental conditions in the precursor mires, in particular the rate of rise in the water table, principally related to the relative rise in sea level, and the degree of marine influence. Laterally towards the palaeo-shoreline, all coal seams have increased proportions of C27 steranes and higher C35-homohopane indices suggesting stronger marine influence on the coastal reaches of the ancient mires. In each well it is also observed that coal seams formed during accelerated relative sea-level rise (T-seams) are characterised by higher contents of sterane C27 and higher C35-homohopane indices than seams formed during slower rates of base-level rise (R-seams). The most landward and freshwater-influenced parts of the seams have higher proportions of sterane C29 and the highest Pr/Ph ratios.

The coals, with respect to thermal maturity, are well within the oil window, except in the Amalie-1 well where they are more mature. The largest average hydrogen indices and thermally extracted and generated bitumen yields are obtained from the T-seams. However, generally an increase in the hydrogen index is recorded in a seaward direction for all seams. Multivariate regression analysis demonstrates that collotelinite, telinite, the vitrinite maceral group, vitrinite-rich microlithotypes and the TOC content have a significant positive influence on the remaining generative potential represented by S2. Pyrolysis-gas chromatography reveals that during maturation the coals will generate from 72.4 to 82.0% oil-like components and only 18.0 to 27.6% gas. However, this does not necessarily imply that all of these oil-like components can be expelled to form a crude oil accumulation. Distribution of C27–29 regular steranes shows good correlation between extracts of Bryne Formation coals and oils/condensates present in Bryne Formation sandstones.

The sum of evidence indicates that the coals in the Søgne Basin have generated and are still capable of generating liquid and gaseous petroleum, but with respect to petroleum generation potential, they are not as good as the documented oil-prone Middle Jurassic coals from North-East Greenland and Tertiary coals from Asia. Mudstones intercalated with the Bryne Formation coals have a similar or lower generative potential as the coals.

In areas outside the Søgne Basin, the coastal plain deposits of the Central Graben Group contain predominantly terrestrial-derived kerogen type III or IIb. The thermal maturity of the organic matter ranges from close to or within the peak oil generation range in the oil window (Alma-1x, Anne-3a and M-8 well) to the late oil window (Elly-3 and Falk-1 wells) or close to the end of the oil window (Skjold Flank-1 well). Only a limited generative potential remains in Elly-3, but the kerogen may initially have possessed a good petroleum potential. In the Falk-1 well, a good generative capacity still remains. The kerogen in Skjold Flank-1 may possess the capability to generate condensate and gas, whereas the organic matter in the Alma-1x, Anne-3a and M-8 wells generally exhibits a poor petroleum generative potential. 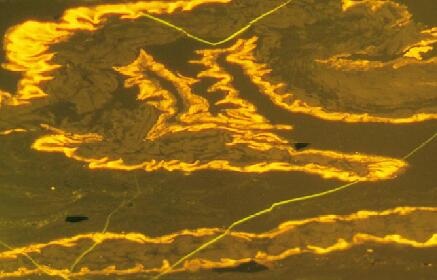