The Ussuit map area is situated around the inner Nassuttooq (Nordre Strømfjord) in central West Greenland, in the core of the Palaeoproterozoic Nagssugtoqidian orogen. The orogen largely consists of reworked Archaean gneisses, as well as Palaeoproterozoic ortho- and paragneisses in its central part. Easy access through the branched fjord system and good exposures along its coastlines, combined with less intense reworking compared to neighbouring areas to the west and south, have made the Ussuit map area the most intensely studied and best known part of the orogen. The most recent research and mapping projects were organised by the Danish Lithosphere Centre (1994–1999) and the Geological Survey of Denmark and Greenland (2000–2001).

The predominant rocks are late Archaean tonalitic and granodioritic orthogneisses, intruded by postkinematic granites. Archaean supracrustal rocks are predominantly of mafic composition, but only few have been recognised. Palaeoproterozoic rocks occur as tectonic sheets (the Ussuit unit) which are always in tectonic contact with the Archaean orthogneisses. The most abundant Palaeoproterozoic rock types are biotite schist and biotite-bearing paragneiss, besides orthogneiss of the Arfersiorfik intrusive suite. The latter rocks are mainly deformed quartz diorites intrusive into the metasedimentary rocks and interpreted as remnants of a magmatic arc above a subduction zone. The Ussuit unit also includes amphibolite, marble and calc-silicate rocks, and lenses of ultrabasic rocks. Small bodies of younger syn- and post-tectonic granites occur throughout the map area. The interleaved Palaeoproterozoic and Archaean rocks form a major anticlinal fold structure between two crustal-scale shear zones, the Nordre Strømfjord shear zone in the north and the Nordre Isortoq steep belt in the south. These shear zones formed during the latest ductiledeformation event (D4), following ductile thrusting (D1) and kilometre-scale folding (D2 and D3). The deformation and high grade metamorphism are the result of collision of two Archaean blocks at c. 1850 Ma, with a presumed strongly deformed suture rooted in the southern Ussuit area.

No economically feasible mineral occurrences have been discovered to date within the Ussuit map area. Minor sulphide mineralisation related to hydrothermal activity occurs in faults and shear zones, and minor stratabound iron formations have been observed. The most promising industrial mineral deposits are minor diopside occurrences and potential dimension stone in migmatised orthogneiss. 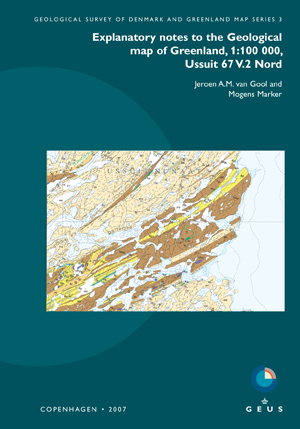