The two adjacent Kangaatsiaq and Ikamiut map sheets cover a coastal area of central West Greenland in the northern part of the Palaeoproterozoic Nagssugtoqidian orogen. The map area is part of the Aasiaat domain, which almost entirely consists of Neoarchaean orthogneisses with intercalated metamorphosed volcano-sedimentary belts. The Aasiaat domain was partially reworked during the Nagssugtoqidian orogeny, but Palaeoproterozoic components are restricted to mafic dykes, the ≤1904 ± 8 Ma (2σ) Naternaq supracrustal belt east of Kangaatsiaq, and remnants of a c. 1850 Ma Palaeoproterozoic ocean-floor – arc-trench association on small islands north-east of Aasiaat. Undated, lithologically similar rocks occur on Hunde Ejlande north of Aasiaat.

The Archaean volcano-sedimentary belts are up to 2 km thick and comprise fine-grained mafic and minor, intermediate amphibolite of ex- and intrusive origin, gabbro, leucogabbro-anorthosite, and biotite-garnet schist with common sillimanite pseudomorphs after andalusite. The c. 2.8 Ga Archaean orthogneiss is largely tonalitic besides minor dioritic and granodioritic components, and preserves intrusive relationships with some of the supracrustal belts. Sheet-like bodies of late-kinematic crustal melt granites are up to about 10 km in length and 2 km thick. One of these has yielded a zircon Pb-Pb age of 2748 ± 19 Ma (2σ). Up to kilometre-thick units of quartzo-feldspathic and locally garnet-bearing paragneisses also occur, some of which are younger than the orthogneisses.

The Aasiaat domain has undergone two Archaean orogenic episodes, separated by injection of mafic dykes and sedimentation at its margins. Archaean deformation resulted in kilometre-scale, tight to isoclinals folds refolded by upright to overturned folds, and its southern part reached granulite facies P–T conditions with widespread partial melting. The Aasiaat domain also underwent heating during the Nagssugtoqidian orogeny, but only its northern part was tectonically reworked, resulting in an intense E–W- to NNE–SSW-trending structural grain associated with subhorizontal extension lineation.

The Palaeoproterozoic Naternaq supracrustal belt in the eastern part of the Kangaatsiaq map area has a complex synformal structure and displays a prominent structural discordance against the underlying Archaean rocks; the belt also contains a second phase of SE-plunging, overturned folds. The Palaeoproterozoic ocean-floor – arc trench association on islands north-east of Aasiaat comprises pillow lava, manganiferous chlorite schist, chert, banded iron formation, graded aluminous schist, and siliceous sandstone, and points to the existence of a palaeosuture in this area.

A Palaeogene picritic sill complex and a small exposure of sandstone form the c. 15 km long island group of Kitsissunnguit / Gronne Ejland in the north-eastern Ikamiut map area. Two contem-poraneous, N–S-trending mafic dykes were emplaced into the basement rocks south-west of the islands. One of these was hydraulically chilled and fractured during its emplacement, presumably due to contact with meteoric or sea water. Widespread hydrothermal alteration occurs along faults and joints in the basement rocks in the northern archipelago. The alteration may have been caused by circulation of magmatically heated meteoric or sea water during the development of the Cretaceous–Paleocene basalt province in West Greenland.

No deposits of economic interest have been found in the Archaean rocks within the map area. A massive sulphide deposit in the Naternaq supracrustal belt was discovered and explored in the 1960s by Kryolitselskabet Oresund A/S, and a VHMS-style copper-gold-zinc mineralisation was reported in 2004 from Kitsissuarsuit / Hunde Ejlande by a local inhabitant. The potential for ornamental rocks is largely unexplored. 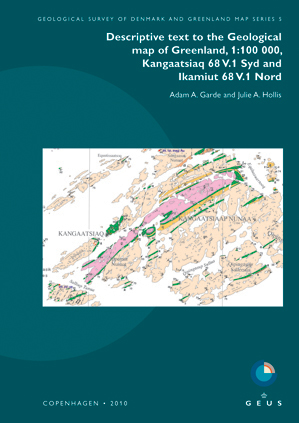