The Lambert Land 1:500 000 scale geological map sheet covers a segment of the East Greenland Caledonian orogen extending between latitudes 78°–81°N and longitudes 13°–29°W. The region was geologically mapped in the summers of 1978–1980 and 1993–1995 as part of a regional Survey mapping programme, and the map sheet was printed in 2000. The region covered by the Lambert Land map sheet comprises a northern segment of the East Greenland Caledonides that is in thrust contact with the Caledonian foreland. The contact is an Edipping, NNE–SSW-trending thrust that runs through Kronprins Christian Land from west of Blåsø in the south to the region east of Sjælland Fjelde in the north. The Caledonian foreland succession is exposed in Mylius-Erichsen Land and Amdrup Højland on the west side of Danmark Fjord, and in western Kronprins Christian Land on the east side of Danmark Fjord. The several kilometre thick foreland succession ranges in age from Palaeoproterozoic to Silurian. In western Kronprins Christian Land the undeformed Ordovician–Silurian carbonates of the foreland pass eastwards into the so-called Thinskinned fold-and-thrust belt developed in the same strata that farther eastwards are structurally overlain by the allochthonous Vandredalen thrust sheet. This thrust sheet is in its turn overlain by a group of thrust sheets that make up the mountainous high ground of central parts of Kronprins Christian Land, and structurally form the so-called Western thrust belt; these rock units have a deeper crustal origin. In the extreme east the Nørreland thrust sheet is exposed in a coastal strip that comprises Palaeoproterozoic crystalline gneisses that include eclogite-facies enclaves and units of meta-igneous and metasedimentary rocks.

Post-Caledonian rocks crop out in the north-eastern coastal parts of the map sheet area, and include sedimentary rocks of early Carboniferous to late Jurassic age that form part of the Wandel Sea Basin succession. Undifferentiated Quaternary deposits, ground moraine, alluvial fans and talus are distinguished where they obscure significant areas of bedrock. 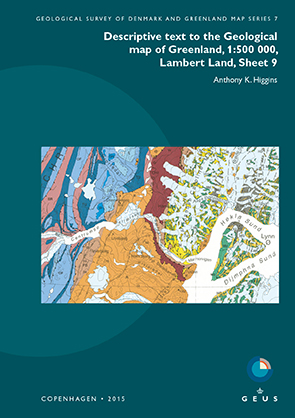